The Dassault Mirage IV was France's first and only strategic nuclear bomber fielded during the Cold War. Designed for a 1954 requirement for a manned bomber for the Force de Frappe, the Mirage IV is -in essence- a very large development of the Mirage III with twin Atar 9K engines. The main purpose of the Mirage IV was to carry the 60-kiloton AN.22 free-fall nuclear bomb, however, its main deficiency was a very limited range for a strategic bomber which meant that one-way missions were in fact contemplated in a worse-case scenario. The Mirage IV also made heavy use of in-flight refueling to alleviate this problem although it is still unlikely many of these bombers would have successfully returned from a nuclear strike (or if there would be much of their country left when they did). Eventually, development of the ASMP stand-off nuclear missile gave the Mirage IV a new life, however, these were retired from service in 1996 giving it the distinction of being the last European strategic bomber ever fielded.

The prototype Mirage IV first flew on 17 June 1958 and entered service in 1964 as the Mirage IVA. 36 of these aircraft were perpetually at combat readiness, dispersed around 7 bases in France (further dispersal was possible using chemically-hardened farmland and rocket-assisted take-offs). A number of these were modified to Mirage IVP standards with the capability of carrying the ASMP missile. A reconnaissance version was known as the Mirage IVR and was still in service at the turn of the millenium. 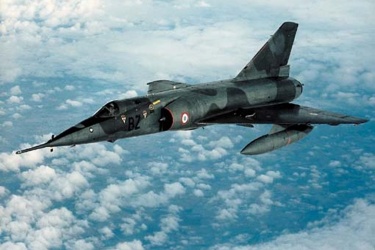