The Mitsubishi F-2, built as a successor to the F-1, is at first glance a near-identical copy of the US F-16. While the Falcon did serve as the basis for development (with the assistance of Lockheed), the F-2 is in fact significantly larger and heavier: it has a 25 percent larger wing, longer fuselage and two-piece canopy which make the aircraft more akin in size to the F-15 than to its actual progenitor. Nevertheless, the F-2 program has been mired in controversy from the beginning, starting with disputes over the ultimate share of US participation, sensitive issues regarding technology transfers and the excessive unit cost of each aircraft which, despite being more capable than the F-16, is considerably more expensive. The F-2 features mainly Japanese avionics including a Mitsubishi active phased array radar, HUD, and fly-by-wire control system and also has the capability to carry local weaponry such as the ASM-1/2 anti-ship missile. About 130 of these fighters are expected to serve eventually with the JASDF.

First flight of the FS-X prototype occurred on 7 October 1995 and was shortly afterwards re-designated as the F-2. The primary single-seat fighter is known as the F-2A while a two-seat conversion trainer is the F-2B. Given Japan's history of building more aircraft than originally intended, some analysts expect as many as 200 eventually being produced for the JASDF. 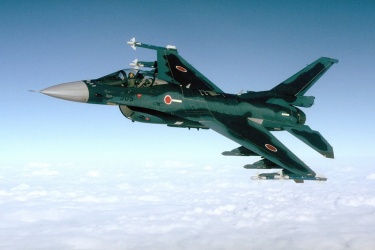