The MOWAG Piranha is arguably the most successful tracked APC in use in the West, a design that has served as the basis for numerous other vehicles such as the Canadian AVGP and LAV III and the derivate US LAV-25 and Stryker. It largely borrows the configuration of modern tracked APC's originating with the Soviet BTR-60: an all-welded steel hull with a sharply sloped front with the driver sitting at the front of the vehicle with the engine to the side, armament installed in the center of the hull, and a troop compartment in the rear with two doors (which include firing ports) that open outward. It is fully amphibious, using two propellers mounted at the rear, and can optionally carry an NBC system, air conditioning, and night vision equipment. From the start, the Piranha was designed to cater to the export market and as a result, it was offered in 4 x 4, 6 x 6, and 8 x 8 versions. It was also versatile enough to function in a number of additional roles, most notably as an anti-tank missile platform and an IFV. The Piranha has undergone five separate generations, most of which include different wheel configurations. The Piranha I and II are broadly similar with the latter featuring improved equipment and a slighlty redesigned hull. The Piranha III was a much more modern version that is covered separately. The Piranha IV was a privately proposed variant that never entered service, while the Piranha V is the latest version that has been annouced for service in Denmark with smaller orders for a number of other countries. Aside from Switzerland, other major users of the Piranha (all versions including Canadian-designed derivatives) inlcude Australia, Belgium, Chile, Iraq, Saudi Arabia, Spain, and Sweden.

The Piranha was designed as a private venture with the first prototype rolled out in 1972. Both Piranha I and Piranha II (originally known as Improved Piranha) versions come in 4 x 4, 6 x 6, and 8 x 8 versions. The latter feature larger tires and various auotmotive improvements as well as special seawater equipment which improve amphibious capability. Only the Piranha II (8 x 8) was adopted by the Swiss Army where it is used as an APC, command vehicle, and Dragon ATGM team carrier. It is known as the Radschutzerpanzer 93 (RadPz 93) and includes a one-man turret mounting a 12.7-mm M2 machine gun. Anti-tank versions can be equipped with TOW and HOT missiles, the former being used in the Swiss Army where it is known as the PanzerJager 90 (PzJg 90). Numerous private-venture proposals of the Piranha I/II have been proposed over the years including assault guns, air defense (both gun and missile-armed), as well as self-propelled mortars. Later Piranha III and Piranha V vehicles as well as the Canadian LAV III are described separately. 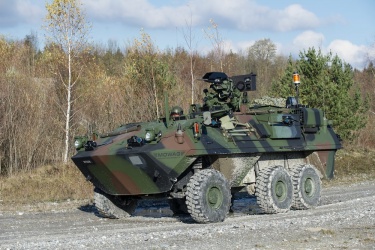