MOWAG (later taken over by General Motors Defense of Canada) continued development of the highly successful Piranha APC, resulting in a third generation of vehicles known as the Piranha III. Like the first two generations, the Piranha III began as a private venture and became available in a trio of wheeled configurations, although the 4 x 4 version was dispensed in favor of a larger 10 x 10 option. The Piranha III follows the general all-welded steel design of its predecessors, but with a longer and wider hull which allows for an increase in payload and internal volume. The hull is more angular to reduce radar reflection and heat signature. It also has additional modular armor which in the frontal arc can protect even against 30-mm rounds, and 14.5-mm all-around. An optional mine protection kit can also be fitted as needed. Compared to the Piranha I/II, the III series has a wider variety of powerplant options, including MTU, Caterpillar, and Scania engines, which can be replaced quicker as well. Various turret configurations are also available, from a basic remotely operated 7.62-mm machine gun, up to a two-man turret with an autocannon. Lastly, the Piranha III has improved off-road performance, and remains both amphibious as well as NBC capability as an option. Export customers include over 10 countries including Canada where LAV III-based versions have been sold abroad as well.

Prototypes of the Piranha III were built in 1996 and were avilable in 6 x 6, 8 x 8, and 10 x 10 versions. Variants designed around the Caterpillar engine are known as the Piranha IIIC and represent the majority of export orders. The Piranha IIIH is a variant with hydropneumatic suspension and is in service with Denmark and Ireland. The Canadian LAV III is directly based on the III series and is described separately, as is the LAV III-based US Stryker. Numerous non-APC support variants exist, while a fire support variant built for the Belgian Army is known as the Piranha IIIC DF90 and mounts a 90-mm CMI Defence turret. 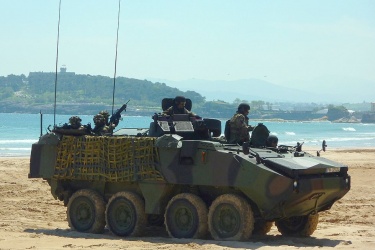