Born out of one of the most successful multi-national aircraft development programs ever, the Panavia Tornado has been widely regarded as being one the world's finest tactical bombers ever produced, and which still remains active nearly four decades after its introduction. Panavia, a joint venture between BAC (United Kingdom), MBB (Germany) and Fiat (Italy), was entrusted with putting together a diverse series of requirements from these different nations in a single airframe, this design became known as the MRCA (Multi-Role Combat Aircraft). For the RAF, it was intended to replace the venerable Buccaneer as well as the cancelled TSR-2 and F-111K aircraft, while for the Luftwaffe and Aeronautica Militare, it would replace their aging F-104s. The result became an aircraft with formidable all-weather, low-altitude, deep-strike capability, intended for both conventional and nuclear attacks along NATO's central front in the final decade of the Cold War. Part of this success is due to its small variable-geometry wings which give the Tornado outstanding low-level maneuvrability. The aircraft also features sophisticated avionics including a nav/attack system with terrain-following radar, as well as other ECM sensors and pods, and infra-red systems. These varied between the three countries and also depending on the variant; the RAF-specific air defense variant was also equipped with a powerful Foxhunter air intercept radar. The Tornado's effectiveness was demonstrated during the Gulf War in 1991 where RAF Tornados undertook some of the most dangerous missions during the opening days of the war, striking Iraq's air defenses and air bases which great success despite losing five of their own. The Gulf War also saw the introduction of the TIALD pod which allowed the Tornado to laser designate its own targets for the first time. Tornadoes were used again to great effect during the Bosnia and Kosovo operations (which included the first participation of the Luftwaffe in combat since World War II), the Iraq and Afghanistan wars, and the recent interventions in Libya and Syria. It has also been used in Yemen by Saudi Arabia, its only foreign operator. Although the end of the Cold War has resulted in most countries gradually reducing their Tornado stocks after the introduction of the Typhoon, its heavier payload and ability to carry a greater range of weaponry means it will remain a valuable asset to the NATO air fleet into the twenty-first century.

The plethora of different requirements for a multi-role aircraft led to the main Tornado IDS (Interdictor-Strike) variant. Designated Tornado GR.1 in the RAF, this is the basic ground and naval attack variant which can carry practically the entire gamma of NATO air-to-ground ordinance including munitions dispensers, laser-guided bombs, and stand-off missiles. All are nuclear capable, with Luftwaffe and AMI IDS units featuring provisions to use US tactical nuclear bombs (like the B61) in wartime. Most countries have gradually upgraded their IDS units with improved avionics and sensors, as well as cockpit enhacements and the capability to carry newer weapons. In RAF service, this upgrade resulted in the Tornado GR.4 which is noticeable for having an underwing FLIR sensor. The latest Luftwaffe IDS versions are also the only Tornados capable of carrying JDAMs. The second major variant of this aircraft is known as the Tornado ADV (Air Defense Variant) and is only in service with the RAF (also exported to Saudia Arabia) where it is designated Tornado F.3 (an earlier F.2 version was produced in small numbers). Featuring a lengthened fuselage and a Foxhunter multi-mode radar, the Tornado ADV is a dedicated long-range interceptor tasked with the air defense of the British Isles with its main armament being the Sky Flash medium-range AAM, but was later AMRAAM-capable as well. Finally, the third major variant of the Tornado is the Tornado ECR (Electronic Combat and Reconnaissance) which is dedicated for SEAD duties; AMI units have been conversions of IDS airframes. Armament is based around the AGM-88 HARM and features an integrated radar emitter locataion system. The ECR version is not used by the RAF, but ALARM-equipped aircraft for SEAD duties are known as the GR.1A and GR.4A. 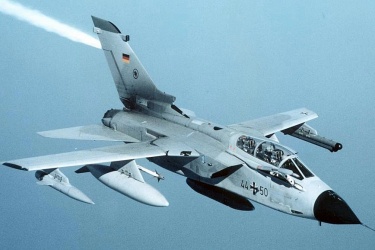