If one aircraft were to symbolize the aerial aspect of the Blitzkrieg, it would be the Junkers Ju 87 Sturzkampfflugzeug, or Stuka. First flown during the Spanish Civil War, the Stuka earned a fearsome reputation during the invasion of Poland and later in the capaigns against Western Europe. The Stuka was a terror weapon from the start: it was equipped with wind-driven sirens that would scream whenever it dived to destroy a country's lines of communication, bridges, railways, airfields, tanks and vehicles. Protected by a shield of Bf 109s, the Stuka appeared invulnerable during the first months of the war even though by 1939 standards it was becoming obsolete yet it was only during the Battle of Britain when the Stuka's weaknesses became apparent as it suffered appalling losses against enemy Spitfires and Hurricanes forcing it to be withdrawn from the campaign. Nevertheless it continued to wreak havoc in the Eastern Front where the Luftwaffe enjoyed air superiority during the first years and endured as a symbol of Nazi aggression for years to come while also serving with Bulgaria, Croatia, Hungary, Italy, and Romania. A testament to the destructive power of this aicraft is the final tally of Hans-Ulrich Rudel, the greatest Stuka ace of the war: a battleship, a cruiser, a destroyer and 519 tanks.

Ju 87s were first flown in 1935 and entered service as the Ju 87A and later as the Ju 87B both of which saw service during the Spanish Civil War. The latter version was the workhorse of the Luftwaffe's tactical air arm during the early years of the war, it was later complemented by the longer-ranged Ju 87R during the Norwegian campaign where the great distances necessitated use of drop tanks, nevertheless both of these versions fought rather unsuccessfuly in the Battle of Britain. The Ju 87D was introduced in 1941 in the Eastern and North African fronts, it featured a revised cockpit as well as a more powerful engine and despite the effectiveness of this aircraft slowly eroding, it became extensively used in the campaign against Russia. It was also for this theater that the Ju 87G was designed as a specialized tank-buster. It inherited the basic structure of the Ju 87D-5 but with twin 37-mm anti-tank cannons packing a very powerful punch. Proposed navalized versions included the Ju 87C and Ju 87E. 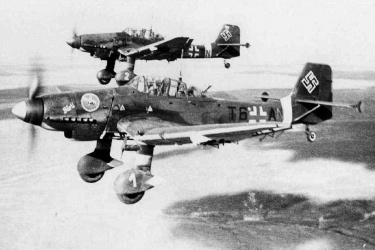