The LTV A-7 Corsair II was designed as a successor to the A-4 in the light attack role for use onboard the US Navy's carriers and as a low-cost temporary stopgap pending the introduction of the navalized F-111 (which, in the event, never entered service). It was also one of the first combat aircraft to feature a HUD, inertial navigation systems, as well as a turbofan engine and was remarkably similar to another contemporary LTV aircraft, the F-8 Crusader, but could not achieve supersonic speeds being that it was specifically designed for ground attack. It preformed well in this role during the Vietnam War (where it was second only to the B-52 in the total tonnage of bombs dropped on Hanoi), the Libya bombings, and also the Gulf War, the last conflict in which it would see service before being retired in favor of the more versatile F/A-18. Besides the USN, the USAF also ordered the A-7 as well as various other countries including Greece, Portugal and Thailand.

First flight of the production A-7A Corsair II was on 27 September 1965 and entered service with the USN less than two years later. It was upgraded as the A-7B with more powerful engines while a similar variant, the A-7C, soon became operational with the USAF due to problems with the intended Rolls-Royce Spey engine which was to power its land-based cousins. Once resolved, the Spey-equipped units were designated A-6D. The definitive USN variant was the A-7E and served up until its retirement in the early 90's. Two-seat versions included the TA-7C for the USN and the A-7K for the USAF. 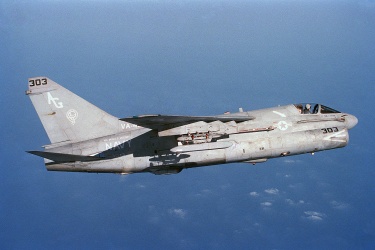