Arguably the finest post-war naval strike aircraft of any nation, the Grumman A-6 Intruder saw service for over 30 years and participated in most of the conflicts involving US forces during that time. A large, stubby, subsonic design, the A-6 was characterized by its extreme ruggedness and survivability in delivering a devastating payload on its targets, its success also lay in its avionics suite which was one of the most advanced in its time and was progressively upgraded in each new variant. A-6s performed the lion's share of the USN's ground attack missions during the Vietnam War (often flying under conditions no other aircraft could), it was also vital in the 1986 strikes on Libya which culminated in the bombing of Benghazi by A-6s, and finally in the Gulf War where they played a lesser yet highly successful role. Despite a number of attempted successors, it was only replaced by the F/A-18 during the 1990s. All remaining A-6s were retired from service in 1997 although electronic warfare units are still in service today.

Maiden flight of the A2F-1, as the Intruder was called, was on 19 April 1960. It entered service three years later as the A-6A, the main variant in production during that decade and which was used in the Vietnam War. Its successor, the A-6E had a whole new set of avionics based on the AN/APQ-148 radar. Later, a TRAM (Target Recognition Attack Multi-Sensor) pod was installed giving it IR and laser designation capability. Other variants include the A-6B SAM suppressor, A-6C night attacker and KA-6D inflight-refuelling tanker. A major electronic warfare platform was also born out of the A-6, this became known as the EA-6 Prowler and is equipped with a wide range of ECM sensors. 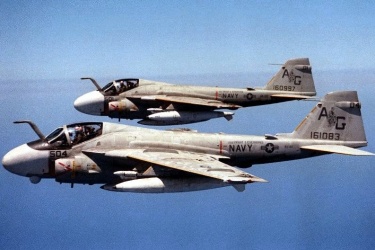