At the turn of the 20th century, the Royal Navy still ruled the waves as it had since Nelson's days. Its contribution to the defeat of the Central Powers and the Axis during the two world wars was enormous, and it has been a pioneer in many elements of naval warfare and technology up to today. Post-war cuts forced the Royal Navy to become a more compact force, but with a long and proud tradition of success and innovation.

The defeat of Napoleon's navy during the Battle of Trafalgar in 1805 left the Royal Navy with indisputable mastery of the oceans, which it used to police its growing colonial empire. But as the century came to a close, it became increasingly challenged by rival powers, most notably Germany. One of the most revolutionary events in naval history was the launching in 1905 of the HMS Dreadnought, the first true all-big-gun battleship which instantly rendered every other warship in the world obsolete. From there began an all-out naval race with Germany which climaxed during the Battle of Jutland in World War I where the Royal Navy won a key strategic victory (despite losing more ships) over the Kaiser's High Seas Fleet. This forced the Germans to undertake unrestricted submarine warfare – a policy that would ultimately drag the US into the war on the Allied side.

The interwar period saw Britain suffering from severe financial difficulties, which led to it accepting naval parity with the US through the Washington Naval Treaty in 1922. Additionally and despite having invented the aircraft carrier in the final stages of World War I, it fell behind both the US and the Japanese in the development of naval aviation. When World War II broke out, the Royal Navy became immediately engaged in what would be longest campaign of the war: the Battle of the Atlantic against Hitler's U-boats, which just as in the last war threatened to cut off Britain's links to its empire and its allies. The battle became a showdown of both brains and brawn, resulting in the development of groundbreaking technologies related to anti-submarine warfare, such as sonar. Elsewhere, the Royal Navy would enjoy considerable success in the Mediterranean against the Italian fleet and once the German U-boat threat had subsided, sent a powerful carrier-based fleet to the Pacific to fight alongside the US against the Japanese. By this time however, the US Navy was vastly superior in size and strength and this disparity would only increase in the years ahead. Nevertheless, the Royal Navy could pride itself in having fought and prevailed in the biggest naval war in the country's history.

The post-war years saw the Royal Navy significantly reduced in size to reflect Britain's shrinking global commitments but it continued to contribute tremendously to naval technology. For example, steam catapults, angled flight decks and optical landing systems were all British inventions that would reinvent the aircraft carrier for the jet age. Throughout most of the Cold War, the UK maintained the second largest navy in NATO even though in some aspects it remained dependent on the US, such as through its Trident nuclear deterrent. Controversially, a Labour government scrapped its last fleet carriers in the late 1970s but partly made up for it through the design of "Harrier carriers" that would become a model for smaller fleets around the world. The ability of the Royal Navy to successfully wage a naval campaign during the Falklands War (the most intense engaged by any country since World War II), as well as its contributions to US-led wars in Iraq, Yugoslavia and elsewhere highlight its enduring global role. Despite post-crisis budget cuts, the construction of two new fleet carriers (the first since the 1950s) plus a new generation of nuclear submarines bode well for the Royal Navy's future.

There are currently 150 entries, data on 96 warship types, and 2,480 individual warships in the registry. 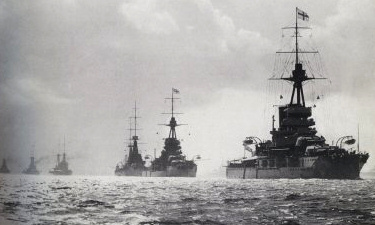 The Grand Fleet goes into action against the Germans at Jutland 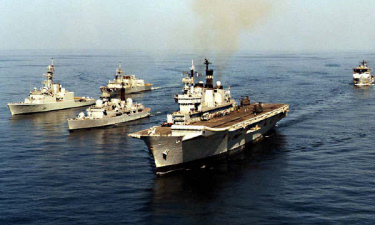 The Royal Navy has been a pioneer in carrier warfare