The Type 99 is the most modern self-propelled howitzer in service with the JGSDF, intended to complement the earlier Type 75 both of which have a similar 155-mm caliber. The Type 99 features an all-welded steel hull and chassis based on a lengthened version of the Type 89 IFV's chassis, distinguishable by having an additional road wheel. The driver compartment is located at the front right with the engine to its left. The fighting compartment is located at the rear, and houses a large, box-like turret which mounts a 155-mm 52-caliber howitzer designed by Japan Steel Works. This is considerably longer tha the 30-caliber gun used on the Type 75 and can fire standard ammunition at a range of 30 km and base bleed rounds at 40 km at a maximum rate of six rounds per minute in burst mode. Unlike the hull, the turret is built of alluminum alloy and features two upper hatches as well as one hatch on each side. Defensive armament is composed of a 12.7-mm gun is mounted on the roof. The Type 99 features NBC protection, advanced fire control system with tactical data link, as well as inertial and satellite navigation systems. The Type 99 is currently in service only with the JGSDF and will be complemented by the cheaper, wheeled Type 19 which uses the same howitzer.

The Type 99 was initially delivered to the JGSDF in 1999. There are no variants aside from the original model. 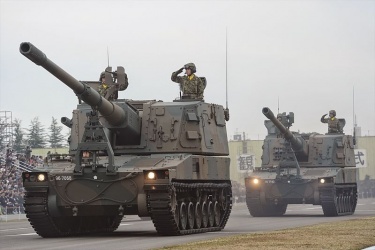