Unlike most Western armies, the JGSDF never adopted the popular US-built M109 self-propelled howitzer instead developing its own 155-mm design known as the Type 75. Like the M109, the Type 75 is made of all-welded aluminum on a specifically-built chassis. The driver compartment is located at the front right, beside which is the engine compartment while the fighting compartment composed of a large, angular turret is at the rear. The main armament is a Japan Steel Works-built 155-mm 30-caliber howitzer which can fire standard ammuntion at a range of 19 km or rocket-assisted projectiles up to 24 km. The gun can only be loaded at an angle of 6 degrees, which necessitates automatic elevation adjustments after firing. Despite this, the Type 74 can fire at a respectable rate of six rounds per minute in burst mode with 18 rounds ready to fire in two magazines plus another 10 rounds plus accompaning fuzes and charges. Defensive armament is composed of a roof-mounted 12.7-mm M2 machine gun and NBC protection is provided as well, but amphibious capability is absent even though a kit had originally been developed. The Type 75 entered service with the JGSDF as one of three self-propelled guns employed, the others being the Type 74 (105-mm) as well as the US-built M110 (203-mm). It remained in service until 2016 by which time it had been replaced by the Type 99.

Work on what would become the Type 75 began in 1969 by the Technical Research and Development Headquarters of the JGSDF with the first two prototypes completed in 1971-72. No variants aside from the original model were built. 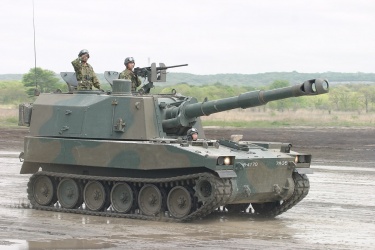