The Type 60 self-propelled recoilless rifle (SPRR) was an attempt to build an indigenous tank destroyer based around a locally-built version of the US M40 anti-tank recoilless rifle used in the M50. Compared with the M50, the Type 60 features a larger hull made of welded and riveted steel. The Type 60 is turretless. Instead, the guns are mounted besides each other on the right'side of the hull and are raised by means of a hydraulic/electric power system (or a manual pump in case of failure). Like the M50, a 12.7-mm spotting rifle is also provided. The Type 60 uses a rear-mounted diesel engine and torsion bar suspension, with various options for tracks which can be fitted with rubber pads or changed for wider versions for use in snow. There is no amphibious capability or NBC protection, and the armor offers only minimal protection against small arms. Despite the questionable effectiveness of recoilless rifles against modern tanks, the Type 60 soldiered on in the JGSDF until the 21st century thus becoming one of the longest serving gun-based tank destroyers ever.

Two prototyles, one built by Komatsu (SS1) and another by Mitsubishi (SS2) were completed in December 1956 and were originally intended to mount four 105-mm rifles, although in the end the Type 60 Model A production vehicles were armed with just two of the 106-mm type. The Model B featured a strengthened hull while the Model C was fitted with a more powerful commercial engine. 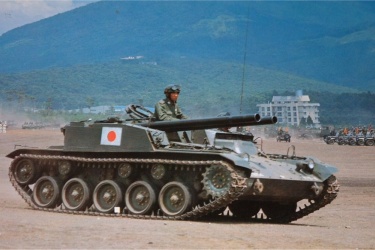