The Tetrarch (A17) was the last of a long series of Vickers light tanks to be used in combat, albeit in much smaller numbers that was originally intended. It's design was directly based on that of its predecessor, the Light Tank Mk VI, but with the added punch of a 2-pounder gun (the standard gun for British medium tanks at the time) as well as numerous mechanical improvements. This included a variation of the Christie suspension as well as a removable track for better road performance. Otherwise, however, performance was limited by the weak gun, intentionally weak protection, and poor visibility for the commander, who also acted as a loader. Production the Tetrarch was delayed by shifting priorities (caused by the poor performance of light tanks during the Spanish Civil War), as well as the fact that the factory was bombed during the Blitz. As a result only a few were built, and saw only brief combat in Madagascar and North Africa where its poor cooling became a liability. It was eventually determined to use it as an air transportable tank and saw action during the Normandy airborne landings as well as the crossing of the Rhine in 1945 where they were carried by a purpose-built glider, the Hamilcar. They nevertheless remained in service until gliders were retired in 1950 and 20 were sent to the USSR during the war as part of Lend-Lease.

The A17 was initially offered in 1938 and known as the Purdah, with an order placed late that year as the Light Tank Mark VII Tetrarch. Aside from the basic tank version, the Tetrarch I CS was converted with a 3-in howitzer, while the Tetrarch DD featured a propeller drive and a flotation screen but not used in combat. A proposed successor was known as the Light Tank Mk VIII Harry Hopkins (A25). This had improved armor and a redesigned hull shape but despite plans for mass production, only around a hundred were built and were not used in combat. Some were completed late in the war as Aleco Dozers. 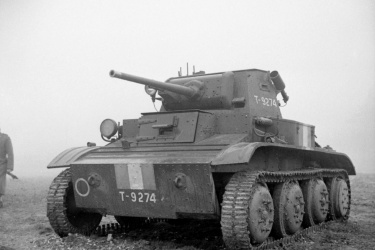