Sixth in the line of Vickers-Armstrong light tanks, the Light Tank Mk VI was the first of the series to be produced in large numbers and also the only to see widespread combat. It was mostly based on the Mk V with the only major difference being an enlarged turret that could house a wireless set. Aside from that, it was mostly identical to its predecessor. Whereas none of the previous light tanks saw active service in World War II, the Mk VI constituted the bulk of Britain's tank strength at the start of the war and during the campaign in France in 1940. Due to the lack of other adequate tanks, the Mk VI was frequently used as a de facto cruiser tank, instead of its intended role as a reconnaissance vehicle. However, the poor armament composed of only a machine gun as well as weak armor protection (no more than 10 mm thick) gave it limited usefulness as a front-line tank. Still, its availability and reliability allowed it to see combat not only in France but also North Africa, Greece, Malta, Crete and Syria. Some were still equipping armored units in the UK as late as 1942 but were gradually replaced and relegated to training.

The Light Tank Mk. VI entered production in 1936 and production went through various different marks. The Mk. VIa changed the position of the return rollers while the Mk. VIb replaced the hexagonal cupola with a cylindrical one. The last variant, the Mk. VIc, had a 15-mm BESA heavy machine gun as its main armament and dispensed with the cupola. A number experimental variants were developed including AA platforms and a bridgelayer but none were used operationally. 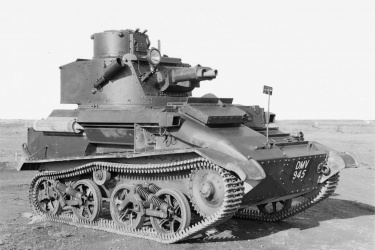