The SPz 11-2 Schützenpanzer Kurz was a tracked armored reconnaissance vehicle built by Hotchkiss-Brandt of France, originally meant for the French Army but did not receive any domestic orders but instead, found interest in West Germany. The SPz 11-2 is based on an earlier series of Hotchkiss carriers and retains much of the original automotive components including engine, transmission, tracks, and suspension. The all-welded hull is also similar although not identical, with the engine at the front and with various ways of entering and exiting the vehicle through either a roof hatch, escape hatch on the floor, and twin doors in the rear. No NBC or amphibious capability is provided. The basic reconnaissance vehicle features a a small turret which mounts a 20-mm Hispano-Suiza HS 820 cannon (the same used in the SPz 12-3). However, the basic vehicle has been adapted for other uses including a mortar carrier, command vehicle, ambulance, and cargo carrier. Over two thousand of these vehicles were built and remained the West German army's main recon vehicle for its Panzergrenadier battalions until the early 1980s when it was replaced by the wheeled Luchs. Despite its versatility, none were adopted outside of Germany (which license produced some of them by Klöckner-Humboldt-Deutz).

Initial prototypes were made for the French Army which did not place any orders. The slightly modified German versions were first produced in 1958 of which the SPz 11-2 (also designated SP 1A)is the basic armored recon vehicle ; a modifed radio vehicle is known as the SPZ 31-2. The SPz 51-2 (SP 1B) is an 81-mm mortar carrier, some of which have been fitted with a US AN/TPS-33 radar and are known as SPz 2. A command and artillery fire control vehicle is the SPz 22-2 (SP 111) while an armored ambulance variant is the SPz 2-2 (SP 1V) which can carry two strechers as well as a sitting patient. Finally, a small number of cargo vehicles (SP 1C) were built, with just four road wheels and a gasoline engine. 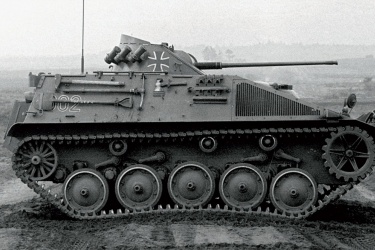