The Fuchs (Fox) has been the standard wheeled APC for the German Army since the 1980s, and originated from the same program that resulted in the Luchs. The Fuchs features a standard layout for a 6 x 6 APC and is built with an all-welded steel hull with spaced armor in certain sections that protects the crew from small arms fire and shrapnel. The troop compartment is located in the rear and can fit as many as 10 fully-equipped infantrymen that dismount through two rear doors; folded seats are provided so that the compartment can be used for cargo (up to five tons in non-amphibious mode). Like the Luchs, amphibious capability is provided through two propellers underneath the rear hull, and there is an NBC protection system as well. Armament varies depending on role, but typically consists of a 7.62-mm MG3 machine gun or a 20-mm cannon on a ring mount. The Fuchs has been exported a small number of other countries, including the Netherlands, Saudi Arabia, Venezuela, as well as the US and the UK. German units have been deployed in the former Yugoslavia as well as Afghanistan, while US units were used as NBC reconnaissance units in the Gulf War.

The Transportpanzer 1 Fuchs was the 6 x 6 derivative of a family of armored vehicles developed during the 1970s (the 8 x 8 variant became the Luchs). It was first delivered to the German Army in 1979. The standard TPz 1 was used as an APC, MILAN ATGW platform, ambulance and engineer support vehicle and is complemented by the TPz 1A1 jammer and direction finding vehicle, the TPz 1A2 RASIT radar, command vehicles, and the TPz 1A3 NBC reconnaissance vehicle. Addition of SEM 80/90 radios resulted in the TPz 1A4, TPz 1A5, and TPz 1A6 convered from the TPz 1, 1A2, and 1A3 respectively. Units serving in Yugoslavia were given additional equipment upgrades and designated TPz 1A7. Some were also provided with add-on armor, while others with appliqué armor and improved suspension were designated Fuchs KRK. In US service, the Fuchs is known as the M93 NBC reconnaissance vehicle with work undertaken by General Dynamics Land Systems; a further upgrade resulted in the M93A1. 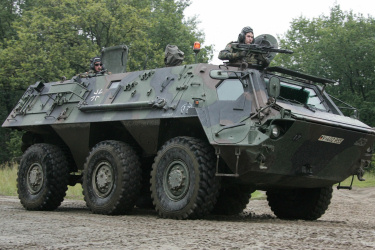