The Scorpion family of vehicles emerged from the CRV(T), Combat Reconnaissance Vehicle (Tracked), program for a new armored vehicle to replace the venerable Saladin armored car. Unlike the 6 x 6 Saladin, the Scorpion was tracked in order to provide greater cross-country mobility, and its hull was designed to fulfill a number of roles beyond reconnaissance. The Scorpion's hull is of all-welded aluminum, with protection from 14.5-mm caliber projectiles as well as shrapnel in its frontal arc. The use of aluminum also makes the vehicle lighter, giving it lower ground pressure and the ability to be airlifted with most transports and large helicopters. It is NBC protected, although this can be removed in order to provide more ammunition storage. Additionally, amphibious capability is provided as an option, and it can ford to a depth of 1 m without preparation. The Scorpion was initially fitted with a 76-mm L23A1 gun, and this was later upgraded to a 90-mm gun. However, subsequent adaptations of the CRV(T) hull resulted in numerous other weapons platforms and vehicles which are described below. The Scorpion was initially adopted for service in the British and Belgian armies but later taken up by as many 19 different countries that were drawn by its affordability and flexibility. British units saw combat during the Falklands War, the Gulf War, the conflict in the former Yugoslavia and more recently, in the Afghanistan and Iraq wars before being retired in 1995 although variants remained in service well into the 21st century.

Prototypes of the CVR(T) were completed in 1969 and were accepted into service in 1972-73 in the British and Belgian Armies as the FV101 Scorpion, where production was shared between the two countries. The basic reconnaissance version, armed with a 76-mm gun, was followed up by the FV102 Striker ATGW vehicle equipped with Swingfire missiles. An APC version is known as the FV103 Spartan, which can carry four infantrymen; typically man-portable SAM teams or Royal Engineer assault teams, or can also be used as a missile resupply carrier for the Striker. Other variants include the FV104 Samaritan armored ambulance with up to four stretcher cases, the FV105 Sultan armored command vehicle, and the FV106 Samson armored recovery vehicle. Further development of the Scorpion resulted in the FV107 Scimitar vehicle with the same hull and turret but with a 30-mm L21 autocannon. This same armament was used in the Sabre, a hybrid vehicle which used the Scorpion's hull and the turret of the CVR(W) Fox APC, and entered service once the Scorpion was retired. The Scorpion 90 is an export-oriented variant fitted with a Belgian-designed 90-m Cockerill Mk. III gun. Export versions also feature numerous modifications from their base variants including different engines and equipment. The Stormer is a larger and heavier version of the Scorpion family and is described separately. 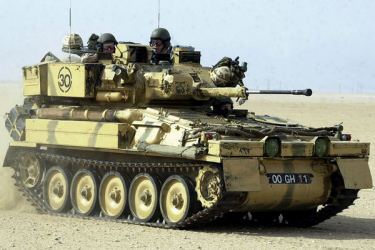