The Alvis Saladin was designed as a replacement for the Daimler and AEC armored cars of World War II, as part of the same development program of 6 x 6 vehicles that resulted in the Saracen. It was originally designed with a 2-pounder gun in mind, but this was later uprated to a 76-mm L5 gun that can fire numerous types of ammunition. Overall, the layout of the Saladin was similar to the wartime armored cars it replaced, featuring an all-welded hull and turret, the latter which is located at the center of the hull with numerous periscopes (with x6 magnification for the gunner). It does not feature NBC protection, night vision and is not amphibious. The Saladin was used by numerous foreign users, which numbered 19, some of which still have it in service. Its combat history is quite varied, including with the British Army in its defense of Cyprus during the Turkish invasion. Kuwaiti Saladins were also in combat against Iraq during the 1990 invasion. In British service, it has largely been replaced by the Scorpion family.

The Saladin evolved from the FV601(A) which was armed with a 2-pouder gun. The first prototypes were ready in 1953, with pre-production vehicles known as the FV601(B) ready two years later. The first production vehicles for the British Army, known as the FV601(C) were delivered in 1959. There are no major variants for the British Army although some modifications have been offered to export customers. 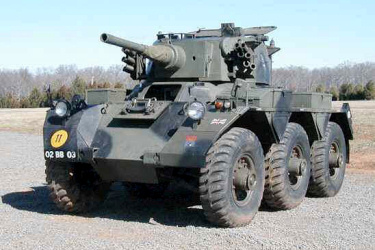