The SOMUA S35 was the standard medium tank of the French Army at the beginning of World War II and is considered by some to have been possibly the best in the world when it first entered service in the late 1930s. The S35 had a good combination of firepower, armor protection and mobility but also suffered from various design flaws. Armament was composed of a 47-mm SA 35 gun which was adequate for its day, while armor protection reached 56mm maximum in the turret (the same used in the Char B1 heavy tank) and 41mm in the hull, both of which were moderately sloped. Suspension was of a semi-elliptical leaf springs, with nine roadwheels paired on four bogies (the ninth had its own spring). Unfortunately, like all French tanks, the turret was operated by a single crewman which limited its effectiveness. The three-piece bolted cast hull was also vulnerable to a shot against the joints. Despite this, the S-35 was capable of holding its own against the German medium panzers in 1940 but was hampered by the turret as well as the lack of radios in many units (despite having provision for it). Additionally, French tactics during the critical first days of the invasion did not allow it to be implemented in the most efficient way. Surviving examples after the French defeat were taken over by the Germans where they used on various fronts and were still in service as late as 1945.

An early requirment for the AMC Automitrailleuse de Combat was issued in the early 1930s and a prototype was accepted for service with the cavalry as the AC3 and later with the Army as the S35. An improved S40 was planned for production in 1940 with a more powerful engine and improved suspension but this project was cut short by the defeat. Another prototype was the SAu 40 self-propelled gun. In German service the S-35 was known as the PzKpfw 35C 739(f) and were frequently modified for other roles including training vehicles, internal security and command vehicles. 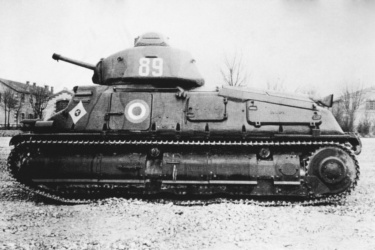