The Char D2 was designed as a successor to the earlier D1. Although slightly larger, the D2 retained its predecessor's overall shape, while sharing its vertical coil suspension as well as the prominent side skirts with mud chutes that were characteristic of French tanks of the period. Most notably, however, the armor of the hull and turret was welded rather than riveted, being one of the first French armored vehicles to be built with such a technique which was costly and complicated at the time. Initial versions of the D2 were armed with a short-barreled 47-mm SA 34 gun which was limited anti-tank capability but this was subsequently replaced by a longer-barreled SA 35 which was more effective. Like most French tanks, however, the turret carried just one crew member which limited his effectiveness. The D2 was planned for mass production in the event the Char B1 heavy tank were to be banned by international treaties, but since this did not happen, it was built only in small numbers. During the German invasion, the D2 equipped various elite units including Charles de Gaulle's regiment, but many suffered from mechanical breakdowns and were taken out of action during its few encounters with the enemy.

A January 1930 requirement led to a further refinement of the Char D1 which at the time was still in development. The initial Renault UZ prototype retained the D1's riveted hull and was built in April 1932 with orders for the Char D2 with a welded hull, APX-1 turret, and 47-mm SA 34 gun following shortly. A second batch was ordered in 1938 with the longer-barreled SA 35 gun. and a more modern APX-4 turret. Unlike most French tanks, none were taken over by the German Army after the surrender. 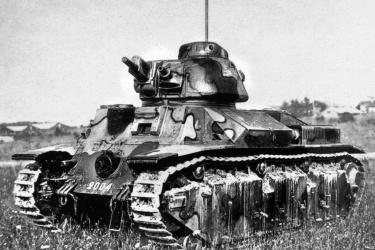