The OF-40 was Italy's first indigenous tank design built after World War II. Designed as a collaborative effort between Oto Melara and FIAT, it was heavily inspired by the German Leopard 1 which was license-produced in Italy; it bears a particularly strong resemblance to the 1A3 and 1A4 variants and even shares some components. Like the Leopard 1, the OF-40 is built of all-welded steel and is designed with a conventional tank layout. Armament consists of an Oto Melara 105-mm gun which can fire most standard NATO ammunition for that caliber; vertical and horizontal stabilization is not provided by default but can be added optionally. Electronic and optical equipment are mostly of domestic origin, and an NBC system is fitted as standard. Strangely for a late Cold War design, the engine is a multi-fuel model, and features a tropicalization kit to prevent overheating. The OF-40 was offered to numerous countries including Thailand, Egypt, Spain and Greece but was ultimately only ordered by the United Arab Emirates, initially for a small batch of just 18 units, which was later doubled. It's hull, however, was used for the more successful Palmeira self-propelled howitzer. No OF-40s were ever used by the Italian Army.

The OF-40 was designed in 1977 and the first prototype was ready in 1980. Initial deliveries of the OF-40 Mk 1 to the UAE took place the following year, and a second batch involved the improved OF-40 Mk 2 with a new fire-control system, and improved sights for the commander and gunner. These were delivered from 1984. The Palmeira is a 155-mm self-propelled howitzer that uses the OF-40's hull and is described separately. 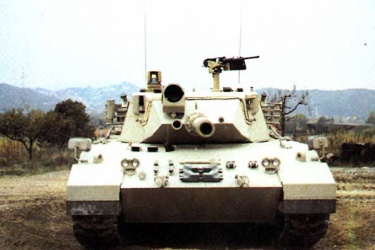