After decades of depending on US or German-supplied designs (some of which were produced locally), the C1 Ariete ("Ram") is the first indigenous main battle tank designed in Italy for the Italian Army. The C1 features a conventional third-generation design of all-welded steel with an additional layer of composite materials for added protection over the frontal arc. The turret has a sloped front although the sides and rear are straight. Further protection is provided by blow-out panels on the turret roof, and an NBC system is installed as well. Armament is composed of an Oto Melara 120-mm smoothbore, with a gun chamber identical to that of its Rheinmetall equivalent (used on the Leopard 2 and M1), which enables compatibility with most NATO ammunition. Suspension is composed of torsion bars and numerous mechanical components (including the transmission) are of German origin, built under license in Italy. Most electronic equipment, including the fire-control system are locally designed and some are shared with the B1 Centauro. The C1 entered service after the Cold War ended and remains the main front-line tank in the Italian Army, with no export orders received. Deficiencies in the powerplant have prompted various proposed upgrades but these have not materialized.

Plans for a new main battle tank were issued in 1982 and the first prototype C1 Ariete was ready in 1986. A planned Mk 2 has been in development but this and various other incremental upgrades have been delayed due to financial difficulties. 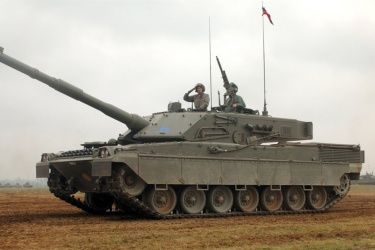