After decades of relying on locally-improved Western (mainly US and British) designs, the Merkava (Chariot) is the first fully Israeli-designed tank to enter service. In being so, it features a relatively unconventional layout compared to its contemporaries, which gives it certain advantages for the type of military operations that the country was accustomed to. The most obvious difference is that the turret and fighting compartment is located at the rear of the vehicle, rather than the center. Instead, the engine compartment is at the front, to the right of the driver. A clam shell type door is fitted at the rear center which provides entrance to the storage compartment where the tank's ample stock of rounds are kept (this was due to the fact that Israeli tanks regularly ran out of ammo in the 1973 Yom Kippur War). With a reduced armament load, however, this compartment can serve as a casualty station, a command and control center, or to carry combat-equipped infantry if needed (however, there are no vision devises or firing ports, and infantry transport is used only when needed). A highly sloped wedge-shaped turret is fitted with a US-supplied M68 105-mm gun, but this was later upgraded to an IMI 120-mm gun from the Mk. 3 onwards. No rounds are stored above the turret ring, which gives the crew excellent protection. Additionally, an NBC system is fitted as standard. Following its introduction in 1979, the Merkava was quick to be used in combat in 1982 where they performed well against Syrian T-62s and were by far the most effective tanks of the Israeli Army at the time. Since then, they have been in constant use for border defense and in operations in Lebanon and Gaza, notably in 2006 during the second intifada. Latest versions feature significant improvements for urban combat and active defense against ATGMs which have been used in large numbers by Hezbollah.

Development of a new locally-designed tank began as early 1967 under the direction of Gen. Israel Tal, and an initial prototype was built in 1974. Initial production units of the Merkava Mk 1 were in service by 1979 and saw action in the 1982 Lebanon War. These were followed shortly after with the Mk 2 which featured a new fire-control system, as well as improved transmission and suspension. Extra spaced armor was also added. The Mk. 3 was a major upgrade to the basic Merkava design to the point that it is almost an entirely new tank. It features a lengthened hull, thicker modular armor, and the incorporation of a IMI 120-mm smoothbore gun which is similar in performance to the Rheinmetall gun of the Leopard 2 and M1. There are also significant electronic upgrades including an advanced threat warning system and an automatic target tracker. Lastly, the Mk 4 is the most recent variant which can be easily distinguished by its elliptical turret (also seen on the Mk 3 Baz upgrade). Better protection against mines and overhead threats is provided making it a superior platform for urban combat. The 120-mm gun is also improved and can carry a wide assortment of ammunition including LAHAT rounds which are used against ground and air targets. The only other variants are the Merkava Nemmera armored recovery vehicle (ARV) and the Merkava Namer IFV which is described in a separate entry. 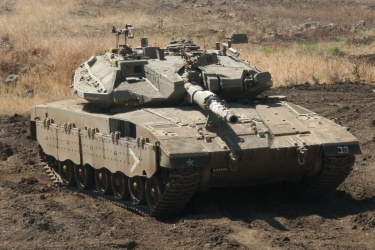