The Sherman Firefly was the result of fitting a Sherman tank hull with a new British-designed turret mounting the powerful 17-pounder gun. When the US Sherman tank became equipping British armored units in late 1942 it was the most powerful tank in its arsenal, and the only one capable of taking on contemporary Panzer IIIs and IVs. Only until 1944 did the British field tanks of comparable firepower (the Cromwell and upgunned Churchill) by which time these too had fallen behind against the latest German tanks, notably the Panther which became one the most widely encountered after the Normandy landings. The use of the 17-pounder on the Sherman finally allowed the Allies to have a tank that was capable of defeating German tanks at a distance and although it still retained the Sherman hull's deficiencies (mainly its weak armor), it became one of the most valuable assets during the campaign in Northwest Europe. A shortage of guns prevented the Firefly to be fielded in large numbers after D-Day, just one per troop, but by 1945 was found in larger numbers. Despite being offered to the US, it was rejected due to preference for its own 90-mm gun. As such, the only foreign operators were British Commonwealth forces along with Czechoslovakian and Polish forces that fought alongside the the British. Some were used in Italy as well.

Merging the Sherman hull and the 17-pounder gun was initially suggested in January 1943 as a preventive measure in the event that the Challenger (A30) were to prove a failure. A pilot conversion was ready by November 1943 and production began in February 1944 with initial units ready by D-Day. Fireflies were designated with a C suffix to their standard Sherman designations, these included the Sherman Mk. Ic (Firefly) based on the M4, the Mk. IVc (M4A3), and the Mk. Vc (M4A4), the latter which was the most widely produced conversion. 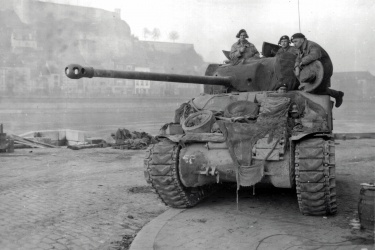