Development of the EBR 75 (Engin Blindé Reconnaissance) was based on a pre-war prototype and subsequently became one of the first major armored vehicles to be designed in France after the war, along with the AMX-13 light tank. The EBR 75 features eight wheels of which four are tired and used for road movement, while the four intermediate wheels have steel gousers to improve cross country performance and are lowered via a hydropneumatic system. The EBR 75 is unique in having two drivers, one at the front and the other in the rear; the latter being used to control the vehicle in the event that it requires a high speed reverse exit. Armament varies depending on variant but involves either a 75-mm or 90-mm gun on a rotating turret along with twin fixed machine guns, thereby continuing the French tradition of heavily armed reconnaissance vehicles. A small number were also built as APCs for colonial use. The EBR 75 was used extensively during the Algerian War and exported to Mauritania, Morocco, Tunisia, and Portugal, the latter which also used it during various colonial wars in Africa. It was eventually replaced by the AMX-10RC in the 1980s.

Designs for a new armored car for reconnaissance duties began in 1938 as the AMR 201, of which one prototype was built but subsequently lost in North Africa after the war began. This design served as the basis for the EBR 75. Four basic variants were built which varied in terms of their armament and turret designs. The basic EBR FL-11 featured a lower profile turret, which was replaced with that of the AMX-13 in the EBR FL-10, but both retained the basic 75-mm gun. Another version of the EBR F-11 was armed with a 90-mm gun instead which had much greater armor penetration. Lastly, the EBR ETT was an APC with two small turrets for mounting machine guns, as well as hatches for the troops to fire from inside. It was the only variant to have just one driver. 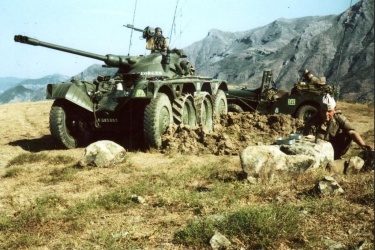