Despite the strong resemblance to the Challenger 1, the Challenger 2 is an entirely new tank, with only around 5% commonality of parts with its predecessor. It is also unique in being the only post-war British tank to be developed as a private venture. These efforts were triggered by deficiencies in the Challenger 1's armament, which was seen as inferior to its NATO counterparts, the M1 and the Leopard 2. To this end, the Challenger 2 is equipped with the 120-mm L30A1 rifled gun armed with CHARM 3 depleted-uranium APFSDS rounds. It can also fire longer range HESH (High Explosive Squash Head) rounds against soft targets and buildings, this being the primary motivation for retaining a rifled rather than a smoothbore gun. Other improvements include a new transmission as well as more advanced equipment and optics. It is also fitted with second-generation Chobham armor, code-named Dorchester making it one of the most well protected tanks in the world. Challenger 2s saw their first deployment as part of the KFOR peacekeeping mission in Kosovo in 1999. However, its first taste of combat came in 2003 during the Iraq War, where 120 Challenger 2s were deployed around Basra, suffering no losses to enemy action. Aside from the British Army, Oman is the only other operator.

Vickers Defence began design of the FV4034 Challenger 2 in the mid-1980s, and prototypes were delivered in 1990 where they competed with the M1A2, Leopard 2A5 and Leclerc MBTs for an initial British Army order to replace half of the Challenger 1 fleet (it was later decided to replace them all). An export version is known as the Challenger 2E is optimized for desert environments and features improved airflow, a German MTU engine, a steering well and upgraded secondary armament. A Life Extension Programme is currently in the works. 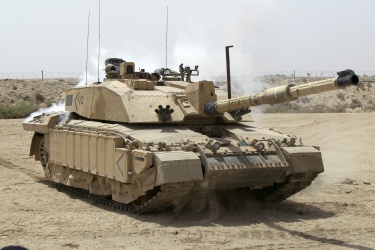