The successor to arguably the finest Western tank of the Cold War, the Chieftain, began life as a custom-made design for the Shah of Iran known as the Shir 2. However, the deal fell through after the 1979 revolution, resulting in the British Army taking up the unfulfilled order. The Challenger 1 was Britain's first third generation tank, and was fitted with the novel Chobham composite armor making it one of the most well-protected tanks of its time. The Challenger 1 was fitted with the tried and tested L11A5 120mm rifled gun, the same as that on the Chieftain, which stood out from the NATO preference for smoothbore guns. Despite the gun's penetrating power, teething problems led to the Challenger falling behind contemporary Western tanks such as the M1 and the Leopard 2 during NATO gunnery competitions. Nevertheless, the Challenger 1 gave a good account of itself during the Gulf War, where over 100 were deployed as part of the 1st (UK) Armoured Division, Britain's land component in Operation Granby. During the four days of ground combat, Challengers destroyed 300 enemy tanks and vehicles without loss, including a 5,100 meter hit on an enemy that stands as an unbroken record to this day. Challenger 1s also participated in the Yugoslavian conflicts later in the decade, before being gradually replaced in British service by the outwardly-similar Challenger 2 in the early 2000s. Despite expectations of numerous NATO and global orders, it was only exported to Jordan. 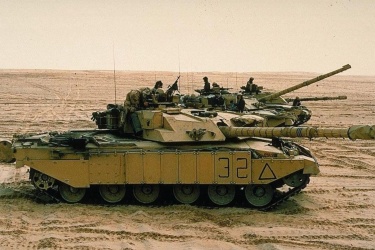