The Archer was the only major British-designed self-propelled anti-tank gun fielded during World War II and played an important role during the campaign in Northwest Europe. It was prompted by the the development of the 17-pounder gun that had the potential of being fitted into an existing tank chassis, in this case the Valentine tank that was becoming obsolete. The Archer was unique in having the turret mounted on the front of the tank but facing to the rear. This avoided overhang and allowed the vehicle to retreat quickly if necessary during hit and run attacks. Like US tank destroyers, the Archer also featured an open topped turret. Archers began entering service with anti-tank battalions of British armored divisions in Northwest Europe in October 1944, serving throughout the remainder of the conflict alongside the Achilles; another conversion of an existing vehicle (the US M10) with the 17-pounder. It remained in British Army service into the mid-1950s and was also used post-war by the Egyptian Army where it saw action during the 1956 Suez Crisis.

Work on the Archer began in July 1942 and a pilot model was ready in March 1943, with the first production model ready exactly a year later when it was designated 17pdr SP Archer. No variants aside from the basic tank destroyer vehicle were produced. 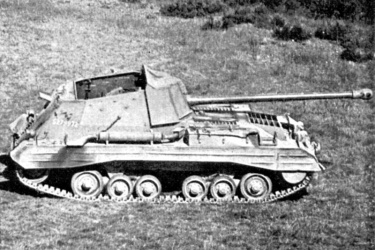