Like most other Chinese strategic aircraft, the Shaanxi Y-8 'Cub' was a reverse-engineered copy of the An-12 transport which nevertheless entered service more than two decades after its Soviet counterpart. Generally similar in appearance, the Y-8 has a slightly lengthened fuselage in addition to other minor alterations to the flight deck as well as a more powerful locally-built engine. Notwithstanding its late development, the Y-8 has been adapted to a far greater range of roles than the An-12, these include helicopter transports, drone carriers, martime patrol aircraft, and even airborne early warning. In addition, civilian versions have been built with a number of upgraded systems thanks to collaboration with Western sources. And, unlike the An-12, the Y-8 is very likely to remain in production until more advanced replacements are conceived.

An initial prototype of the Y-8, built using supplied Soviet An-12 kits, was first flown on 15 December 1974. Variants include the Y-8A helicopter transport, the Y-8C with a pressurized cargo hold and a rear-loading cargo door, the Y-8E drone carrier and the Y-8X maritime patrol aircraft. Additional units are being developed for electronic warfare and surveillance duties in addition to a specialized airborne early warning (AEW) platform with significant Western avionics and systems. 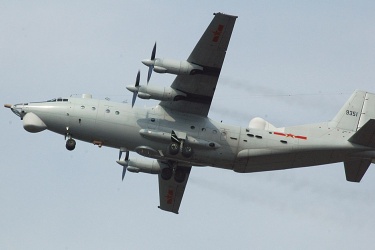