The Xian Y-7 'Coke', based on the An-24 and its derivates, was near-identical reverse-engineered version of the successful Soviet short-range transport which only entered service until the 1980s due to various failures in passing its certification tests in the previous decade, mostly due to an underrated locally-built powerplant which was subsequently replaced. It eventually entered service with the PLA where it was augmented by a number of Western avionics throughout its development life for both military as well as civil versions, the latter which can be easily differentiated from Soviet units due to their incorporation of wingtip winglets (otherwise, they have nearly identical airframes). The improved Soviet An-26 'Curl' was also eventually adapted into a newer version of the Y-7 with both aircraft sharing duties for all three branches of the PLA up to today.

First flight of the Y-7 was made on 25 December 1970 but encountered a number of technical difficulties and thus did not enter service until 1982 with a new, more powerful engine. The only other major military version is the Y-7H, copied from the more modern Soviet An-26 and also with an upgraded powerplant. Civilian passenger variants are known as the Y-7-100 and Y-7-200, these are generally equipped with a number of Western avionics. Lastly, the HYJ-7 is a trainer version for for transport and bomber pilots. 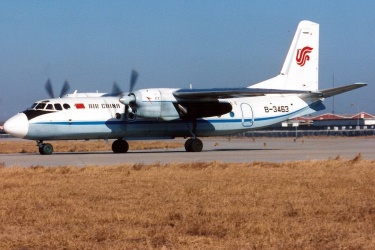