The Aérospatiale SA 341 Gazelle began as a result of the Aviation Légère's (ALAT) requirement for a light observation helicopter. It shared a number of similarities with the Alouette family but introduced a new enclosed fuselage, a German-built rotor, and most revolutionary, a patented Fenestron ducted fan anti-torque tail rotor which would soon become commonplace in many modern Aérospatiale (and later Eurocopter) designs . The Fenestron is unique in that the rotor is enclosed within the tail skin thus making it more safe for ground crew in addition to being much quieter than conventional tail rotors. Eventually it was realized that the Gazelle would make an excellent attakc platform and was therefore equipped with cannons, rockets, and anti-tank missiles in addition to advanced avionics to reduce pilot workload. The Gazelle has seen extensive action in the Falklands, the Gulf War, Kosovo, among countless other minor conflicts and has been adopted by some 30 nations which include license production in the United Kingdom (Westland), Yugoslavia (SOKO), and Egypt (Arab British Helicopter Company).

The Gazelle was initially developed as the SA 340 prototype which included the Alouette III's conventional rotor in place of the Fenestron type. It was first flown on 7 April 1967 entering service in the early 1970s as the SA 341. The British were a major user of the Gazelle and a number of variants were used exclusively by the Army, (SA 341B), Royal Navy (SA 341C) and the RAF (SA 341D), known in service as the Gazelle AH.1, HT.2, and HT.3 respectively. In French service, the Gazelle was eventually fitted with an uprated powerplant and designated SA 341F while in Yugoslavia, a SOKO-built version was known as the SA 341H and was the first to feature anti-tank and anti-helicopter armament (specifically, AT-3 and SA-7 missiles). Similar French developments led to the SA 342 with more powerful engines and numerous weapon configurations. Export military and civilian versions were known the SA 342J and SA 342L respectively while the more capable and advanced SA 342M was used by the French for the anti-tank and helicopter escort roles. 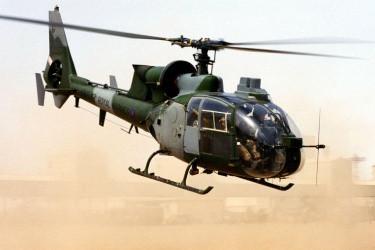