Last in the line of the highly successful Alouette series, the Sud Aviation SA 316 Alouette III was a considerably redesigned version of its predecessor, and a far more capable helicopter overall. The Alouette III had a larger and more enclosed cabin which could carry up to six equipped troops, 2 litters, or small cargo loads. Its enhanced performance, however, was due to more powerful turboshaft engines, a trend which had begun in the Alouette II. Although designed as a general-purpose helicopter, its versatility has lent itself to a variety of roles including light-attack, anti-submarine warfare (equipped with a magnetic anomaly detector), as well as search and rescue (SAR), and can be equipped with weapons such as torpedoes and air-to-surface missiles. The Alouette III has been used by around 70 nations for both military and civilian use, this includes license production in India, Romania and Switzerland.

Maiden flight of the Alouette III took place on 28 February 1959 with production units taking to the air two years later as the SA 316A. The most widely produced variant would eventually be the SA 316B which introduced the Artouste IIIB turboshaft with upgraded main and tail rotor transmissions as well as increased payloads. A further engine enhancement led to the SA 316C which was built only in small numbers. Finally, the SA 319B incorporated an Astazou engine and was used primarily for military roles. Indian versions are known as the HAL Chetak. 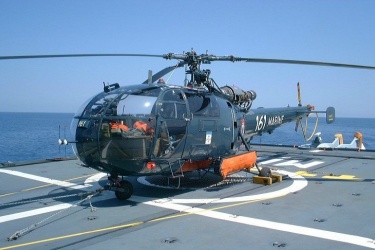