Continuing the trend of making local copies of Soviet aircraft, the Harbin H-6 'Badger' is a Chinese version of the Tu-16 bomber and currently the most important aircraft of its type in service with the PLAAF and PLANAF despite being rather obsolete by modern standards. Nevertheless the H-6 was eventually adapted to fill a myriad of roles including nuclear bomber, anti-ship strike, cruise missile carrier, reconnaissance, electronic warfare and tanker. Although initially just a crude copy of its Soviet counterpart, over time the H-6 became more adapted to Chinese operations as a result of frequent upgrades which have increased its combat capability considerably to the point that it is now able to perform all-weather day/night attack missions. Thus, despite its age, the H-6 will likely continue to be in service for the forseeable future given the lack of any planned replacement in the short term.

First flight of a H-6 made from Soviet-supplied kits by Harbin was on 27 September 1959 yet the program soon fell into a series of delayes which forced production to move to Xian and only until late 1968 did the first fully local-built H-6A actually make its maiden flight. Variants of the H-6 include the H-6B reconnaissance aircraft, the H-6C which is fitted with ECM, the H-6D maritime strike platform and the H-6E with nuclear capability. A subsequent mid-life upgrade resulted in the H-6F, providing the venerable aircraft with a new suite of advanced avionics including GPS navigation while the H-6H provided the ability to carry air-launched cruise missiles and is instantly recognizable thanks to a prominent radome in the rear fuselage. Finally, the H-6U is a tanker with two hose-and-drogue refuelling pods. 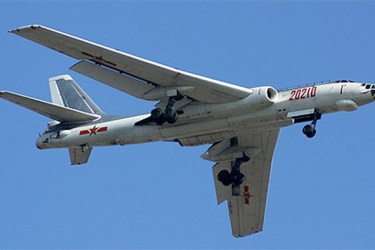