The Harbin H-5 'Beagle' is China's license-built version of the Il-28, the first jet bomber to enter service with the USSR. It was supplied to China during the 1950s along with technical assistance for domestic production which was suddenly interrupted due to the Sino-Soviet split, forcing Harbin to proceed with a reverse-engineered version of this aircraft. The H-5 was almost an identical copy of its Soviet counterpart, featuring a cigar-shaped fuselage, nose glazing, straight leading edge wings and pod-mounted turbojets. It was also quite obsolete by the time it entered service in large numbers (mainly because of a lack of avionics which limited it to daylight missions) but nevertheless still remained operational with the PLAAF and PLANAF until the early 90s although a small number of reconnaissance and maritime surveillance versions are still in use.

The first H-5 flew on 25 June 1962 and entered service with the same H-5 designation five years later. Naval variants carry torpedoes while the modified H-5A is nuclear-capable. A reconnaissance version is known as the the HZ-5 while an electronic warfare adaptation still in use is designated HD-5, to these are added other variants such as the HJ-5 trainer as well as some basic H-5s converted as testbeds for the YJ-8 anti-ship missile. 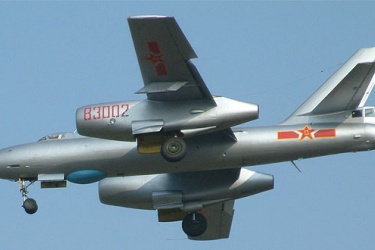