Based on the highly successful T-2 advanced trainer, the Mitusbishi F-1 was Japan's first indigenous combat aircraft built after World War II as well as its first supersonic fighter. Sharing a certain resemblance both in shape and function to the Anglo-French Jaguar (including the license-built Adour engines), the F-1 was designed primarily for ground attack missions with a secondary air-to-air capability to replace the elderly F-86 Sabers still in service with the JASDF. The main difference between the F-1 and the T-2 is the faired over rear cockpit which contains additional avionics which allow it to carry a wide range of weaponry including the ASM-1 anti-ship missile although it is capable of carrying other types of air-to-air and air-to-ground ordinance. It is in this maritime strike role where the F-1 continued to serve until being replaced by the more modern F-2.

The F-1 began life as the FS-T2-Kai prototype which took to the air on 3 June 1975. It was a conversion of the T-2 trainer just like the following prototypes which were designated XT-2 until the first production version was rolled out and christened F-1. No major variants have been produced although the aircraft has been given various avionics upgrades, most notably the J/AWG-12 radar which provides compatibility with the ASM-1 air-to-ground missile. 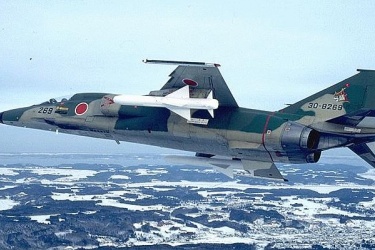