Known in its development stage as the EF-2000, the Eurofighter Typhoon is a collaborative effort involving British Aerospace (UK), DASA (Germany), Alenia (Italy) and CASA (Spain), and represents the pinnacle of European fighter technology. Like most 4.5-generation fighters, the Typhoon is a delta-winged aircraft with canards which affords it extraordinary maneuverability along with a reduced radar cross-section even though it is not strictly stealth. Although the design is inherently unstable, it features a quadruple fly-by-wire system as well as an advanced glass cockpit and a sophisticated defensive aids sub-system known as Praetorian which provides the pilot with comprehensive situational awareness and quick reponse to air and surface threats. The Typhoon is equipped with the CAPTOR multi-mode pulse Doppler radar, widely considered the most advanced of its type, with plans to eventually equip it with the CAPTOR-E AESA radar. RAF aircraft are also equipped with the PIRATE IRST system. Initial aircraft were cleared only for air defense roles, though air-to-ground capability has been slowly added including provisions for smart bombs and cruise missiles. In the air-to-air role, the Typhoon is also equipped with the latest in European weaponry, notably the Meteor beyond visual range missile which has equipped RAF aircraft since 2018. The Typhoon will give the RAF its first indigenous single-engine fighter since the English Electric Lightning and will replace the Tornado F.3, while in German and Spanish service it will replace the aging F-4. However, aside from Austria and some Middle Eastern clients (notably Saudi Arabia), the Typhoon has struggled in the export market against fierce competition from the Rafale, F/A-18E, and F-35. Despite this, the Typhoon will remain a formidable addition to the European fighter arsenal and has proved itself well in the conflicts where it has participated, such as the 2011 Libyan intervention and the war in Syria.

First flight of the development DA-1 took place in Germany on 27 March 1994 and was followed later by first flights by development aircraft in the other three partner nations. The Typhoon manufacturing process has been undertaken through tranches, with all four nations in charge of final assembly of their respective aircraft. Tranche 1 aircraft have been limted to air defence roles, while Tranche 2 adds ground attack capability. Tranche 3 is the latest standard which will add new avionics including the CAPTOR-E radar. In RAF service, initial air defence aircraft are known as the Typhoon F.2, while those with ground attack capability are designated FGR.4. Two-seat combat-capable trainer variants are known as T.1 and T.3. 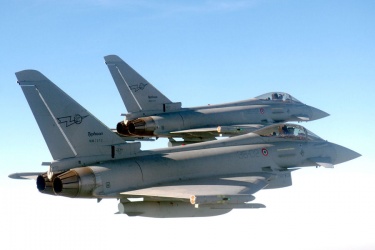