The Wyoming-class battleships were a further refinement of the previous classes of US dreadnaughts. They were the last US battleships armed with 12-in guns in six double turrets, two of which were located amidships. These guns were of the Mark 7 type, which had longer caliber than the Mark 5 guns that had previously been the standard. Secondary armament was comprised of the ubiquitous 5-in/51 guns which were located on casemates below the main deck, making them extremely wet in action. Armor protection was focused primarily on the sides, given the belief that combat would be at close range, with little consideration for plunging fire. This protection was improved during post-war modernizations, in which torpedo bulges were added. Additionally, anti-aircraft armament was installed, as were oil-fired boilers, new fire control equipment, and aircraft catapults. The Wyoming ships were first used during the US occupation of Veracruz in 1914, and later joined the British Grand Fleet during the later stages of World War I. As a result of the Washington Treaty, the USS Wyoming was converted into a training ship but the USS Arkansas served with distinction throughout the war, both in the Atlantic and Pacific.

Both the USS Wyoming and USS Arkansas were involved in the occupation of Veracruz and were later sent to reinforce the British Grand Fleet during World War I. The USS Wyoming was turned into a training ship, firing more ammunition in World War II than any other ship in the US fleet, albeit not in action. The USS Arkansas began service in World War II on neutrality patrols in the Atlantic and later as convoy escort. It participated in D-Day, and later in Operation Dragoon after which it was sent to the Pacific where it was in action in Iwo Jima and Okinawa. It was sunk during underwater atomic bomb testing in the Bikini Atoll. 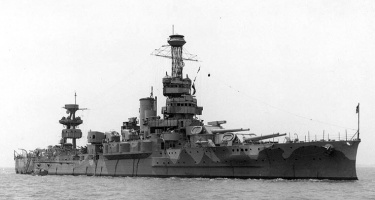