The United States is the foremost naval power of today, being undeniably more powerful than all the rest of the world's fleets combined. This is largely due to its mastery of naval aviation, giving it the ability to project power anywhere in the world. However, the US Navy's dominance at sea did not come easy: it needed to defeat the Japanese in combat during World War II and later face off against the Soviet threat in the Cold War.

The US has a long history of naval operations, stretching as far back as its own war of independence. It was only until the late 19th century, however, that it recognized the importance of having a blue water fleet to pursue its imperial ambitions as evidenced by Teddy Roosevelt's sailing of the "Great White Fleet" across the world in 1905. The US Navy became the world's third largest soon thereafter and expanded massively during World War I. Even though it did not participate in any major naval battle, it played a key role in supporting Britain's war against the German U-boats. The eventual scrapping of the German fleet after the war left the US Navy in the advantageous position of being able to potentially overtake the Royal Navy due to the US's greater financial and industrial muscle. An arms race was averted, however, thanks to the Washington Naval Treaty where the US was given parity with Britain. This allowed it to focus instead on the growing menace of the Japanese navy in the Pacific.

The US navy came of age in World War II, engaging the Imperial Japanese Navy in the most intense naval campaign in history across the breadth of the Pacific Ocean. Despite suffering numerous initial setbacks, the US turned the tide of the war following its stunning victory in the Battle of Midway. From then on, the US's superior industrial might became the dominant factor, adding millions of tons of new warships each year and in the process amassing the largest fleet the world had ever seen. By 1945, the US Navy ruled supreme in the Pacific, with over two dozen large carriers, hundreds of escort ships and submarines, plus a fleet of amphibious ships and landing craft that numbered in the thousands. Its role in the Atlantic was also vital, helping the Royal Navy sweep the seas clear of German U-boats and contributing to the numerous Allied amphibious operations throughout Europe, including D-Day. As part of Lend-Lease the US supplied the Royal Navy with considerable amount of material, not least of which were landing ships, escort carriers, as well as carrier and patrol aircraft.

With the Royal Navy having to downside in the post-war years, the US effectively became the new global policeman. The expansion of Soviet naval capabilities during the 1960s proved to be the US Navy's most important threat during the Cold War but it retained its edge throughout the decades thanks to its two main assets: its nuclear-powered carriers – each one with an air wing that is stronger than most countries' air forces – and its submarine-based nuclear deterrent. Post-Cold War threats have led to a transformation of the country's naval capabilities, retaining the primacy of naval air power to react quickly in the event of crises but with greater experimentation on surface ship design and a reallocation of naval assets from the Atlantic to the Pacific (where 60% of the US's naval power is now concentrated). What is clear is that despite fiscal difficulties, the US Navy will remain second to none for the foreseeable future given that its next likely challenger, China, is still decades away from being its equal.

There are currently 192 entries, data on 56 warship types, and 5,307 individual warships in the registry. 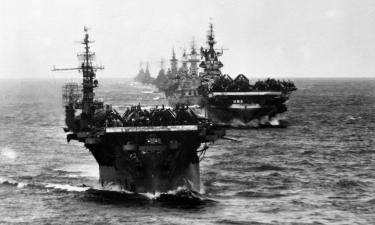 The US built up the largest fleet the world had ever seen in World War II. 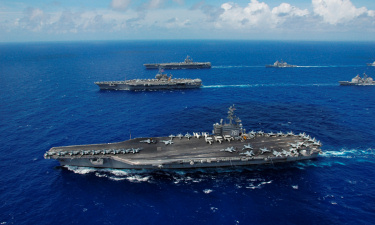 Carrier power still forms the core of US naval might today.