The Tennessee-class was the first of the post-World War I US battleship classes and fourth of the Standard-type designs that began with the Nevada-class. The Tennessee ships were the first US battleships with twin funnels and which did not equip its secondary armament in casemates. Their fore masts were also noticeably shorter from the top of the superstructure. Aside from that, they were largely similar to their predecessors. Armament consisted of twelve 14-in guns arranged in four triple turrets; these could be elevated to 30 degrees (compared to the 15 degrees of earlier designs) giving them superior range, which also benefited from the use of spotter aircraft as well as fire control equipment. The hull design incorporated many of the lessons from the Battle of Jutland, mainly in offering substantially greater underwater protection. Both ships of the class were in Pearl Harbor during the attack and suffered significant damage which resulted in a thorough modernization that lasted nearly two years. During this time the entire superstructure was reconstructed: the cage masts were removed and the twin funnels merged into a single one. Upgraded secondary armament (consisting of dual-purpose guns) and fire-control radar was also installed. Both ships rejoined the Pacific fleet in 1943 and participated in many of the island-hopping campaigns, mainly as fire support. Both ships were part of the 7th Fleet in the Surigao Strait during the Battle of Leyte Gulf, scoring hits against the Japanese battle fleet in what was to be the last major surface engagement between capital ships in history.

Both the USS Tennessee and the USS California has broadly similar combat histories during World War II: both were severely damaged during Pearl Harbor, the USS California more so since it sunk in shallow water. The USS Tennessee joined the fleet in 1943 and its sister the following year, participating in numerous battles most notably the Battle of the Surigao Strait. Both were scrapped after the war. 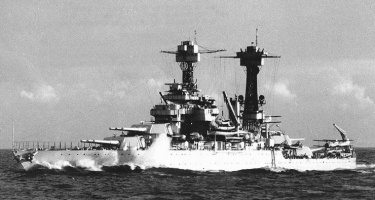