The South Dakota-class were the second fast battleship class in service with the US Navy and the last to be built within the limitations of the Washington Naval Treaty. The South Dakotas retained the same 16-in Mark 6 guns of their predecessors, the North Carolina-class, but were considerably shorter. A similar top speed of 27 knots was maintained by reducing the size of the power plant, which was essentially also the same as in the preceding class. Some space was also saved by reducing the number of secondary armament batteries (consisting of 5-in dual purpose guns). The most important improvement, however, was with regards to armament, which resolved some of the shortcomings of the North Carolina-class particularly with regards to underwater protection. The result was one of the best protected battleship designs of any nation, and comparable to the larger and heavier Iowa-class that followed. As a result, they have been widely considered to be the finest Treaty battleships ever built, due to their excellent combination of firepower (enhanced by fire control radar), speed, and protection; their main drawback was that they were somewhat cramped due to their shorter length. All four ships saw extensive service in the Pacific theater, and three of them also operated in the Atlantic either supporting the British Home Fleet or the North Africa landings. None were sunk in combat although the South Dakota was severely damaged in a battleship duel off Guadalcanal. They were decommissioned shortly after the end of the war, and either turned into museum ships or scrapped. 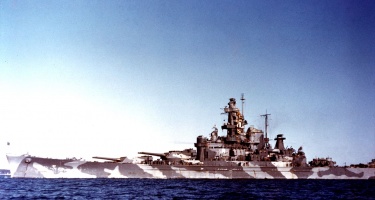