The North Carolina-class were the first US battleships built in nearly two decades, and also the first to be built according to the limitations set by the 1922 Washington Naval Treaty. The North Carolina-class was developed after no less than 35 design proposals were submitted to the US Navy for a ship to counter the Japanese Kongo-class. The accepted design contemplated twelve 14-in guns but the barbettes were designed to accommodate 16-in guns in the event that the Japanese would equip their ships with the larger caliber. In the event, nine 16-in Mark 6 guns were adopted in three triple turrets, an arrangement that would be standardized in all three contemporary battleship classes. As a result of the heavier firepower, some degree of armor protection and speed was sacrificed (they were originally intended for 30 knots, but this was dropped to 27). Longitudinal vibrations resulted in a change in propellers before the ships became seaworthy but both ships of the class served with distinction in the Pacific (The USS Washington briefly served with the British Home Fleet in the Atlantic as well). Throughout the war they were upgraded with addition anti-aircraft defenses (including the superb 5-in dual-purpose guns as well as a score of Bofors and Oerlikon batteries) as well as fire control radar. Both were decommissioned shortly after the war.

Following its commissioning in April 1941, the USS North Carolina became the first fast battleship in US service and eventually the most decorated battleship in the fleet. Her sister, the USS Washington was used as a reinforcement for the British Fleet in 1942 before being transferred to the Pacific. Its most memorable action was its duel against the Kirishima off Guadalcanal on 15 November 1942, one of only two incidences of battleship versus battleship combat in the Pacific. The Kirishima along with an accompanying destroyer were sunk with no damage to the Washington. Both ships were used extensively as carrier escorts and for fire support throughout the island-hopping campaigns in the Pacific. 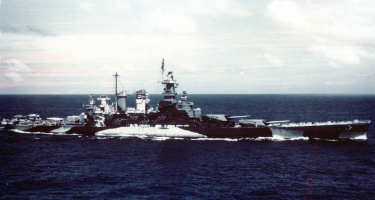