Conceived as an improvement over the Wyoming-class, the New York-class battleships were the last conventional US dreadnougts and incorporated features that would not be seen afterwards. The New York-class ships featured considerably uprated armament in the form of ten 14-in/45 guns arranged in five double turrets, one of which was located amidships (the last class to do so). Secondary armament consisted on 5-in/51 guns but as was the case with contemporary designs, proved to be vulnerable to rough seas. The New York-class was the first to be equipped with anti-aircraft guns which was later improved following refits and modernizations in the interwar period. It was also the last to have standard armor protection rather than the 'all-or-nothing' scheme used in subsequent classes. Their use of coal rather than oil was also a last among US battleships. Ironically, this allowed the two ships to be sent with Battleship Division 9 to reinforce the British Grand Fleet during World War I, given the shortage of oil in the UK. They then served in both the Atlantic and Pacific in World War II. However, their first use in combat was during the US occupation of Veracruz in 1914. After World War II, both ships were decommissioned, one of them sunk as a target but the USS Texas survived as a museum ship; the oldest dreadnaught to be preserved.

The USS New York was the flagship of the US fleet sent for the occupation of Veracruz during the Mexican Revolution. Later it served with the British Grand Fleet in World War I, and as a convoy escort in the North Atlantic during World War II. It participated in the Operation Torch landings and later moved to the Pacific where it was in action at Iwo Jima and Okinawa. The USS Texas had a nearly identical combat history to its sister, but was used on D-Day and later Operation Dragoon before moving to the Pacific where it was also present at Iwo Jima and Okinawa. 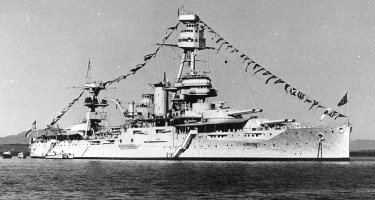