Third in the Standard-type battleship designs, the New Mexico-class followed the pattern of incremental improvements over the previous class. The New Mexico ships had the characteristic twin cage masts and single funnels of pre-Treaty US battleships. Armament was composed of twelve 14-in guns arranged in four triple turrets: these were of a longer caliber than their predecessors but retained the limited 15 degree elevation. Secondary armament consisted of 5-in/50 guns but some of these were arranged along the bow and stern which proved to be extremely wet in rough weather. As was the case with most US battleships, they were afforded relatively good protection at the expense of speed (just 21 knots) and this was improved during their modernization in the 1930s in which torpedo bulges were installed. The modernizations also gave the ships new powerplants (the USS New Mexico had been originally installed with an experimental turbo-electric propulsion but this was removed) and a completely redesigned superstructure that eliminated the cage masts and added more sophisticated fire-control systems. Two of the three ships of the class were commissioned before the end of World War I but did not see action. Operating as Battleship Division 3, the three ships were in the Atlantic during the attack on Pearl Harbor, thereby escaping damage, and were soon sent to the theater in order to bolster the battle fleet. They all served with distinction in the island hopping campaigns across the Pacific and were scrapped after the war.

The three ships of the class, the USS New Mexico, USS Mississippi, and USS Idaho were all on neutrality patrol in the Atlantic when the Japanese struck Pearl Harbor, and they sailed immediately to the Pacific afterwards. They were used for fire support and convoy escorts and participated in many of the island hopping battles from 1943 onward. Late in the war, the USS New Mexico and USS Idaho received multiple kamikaze hits. The USS Mississippi was present as part of Adm. Oldendorf's battle fleet in the Surigao Staight where it contributed to the sinking of the Japanese battleship Yamashiro, firing history's last battleship versus battleship salvos. It was retained for about a decade after the war as a weapons testing ship. 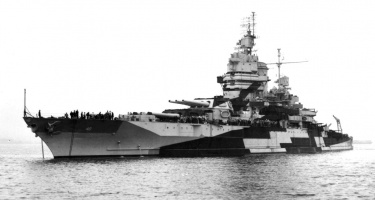