The Nevada-class was one of the most revolutionary US battleship designs, incorporating many of the innovations seen in European navies for the first time. They were also the first of the so-called Standard-type of battleship designs up to the Colorado-class. These ships were meant to have consistent speed (21 knots) in order to create a homogeneous battle line, with only incremental improvements. They were also the first US battleships to be fueled by oil, rather than coal. Armament of the Nevadas consisted of ten 14-in/45 guns, the same as in the preceding New York-class ships but with the lower turrets mounting triple guns (another first in a US battleship). Secondary armament was composed of 5-in Mark 15 guns but as was the case with its contemporaries, were located low on the hull and suffered during rough weather. With regards to armor, these were the first ships that were based on the 'all-or-nothing' concept, in which all armor was focused on the vital areas of the ship. Torpedo bulges were added during subsequent modernization, which also involved new boilers and turbines, and a rearranging of the secondary armament into higher decks. The two ships served in World War I protecting supply lines and both were in Pearl Harbor when the Japanese attacked. The USS Oklahoma received serious damage and was a complete loss; its sister served with distinction in both the Pacific and Atlantic and participated in D-Day.

The USS Nevada served in the Atlantic during World War I and during the attack on Pearl Harbor, was beached in order to prevent sinking. It was used for fire support during D-Day, Operation Anvil and later in the Pacific, in Iwo Jima and Okinawa. Used as a target during the Bikini atoll nuclear tests, it remained afloat but was later sunk as a target. The USS Oklahoma had a similar career during World War I and the interwar period but suffered more extensive damage at Pearl Harbor from bombs and torpedoes, and was not recovered after sinking. 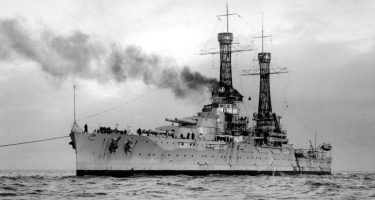