The Iowa-class was the last and finest of US battleships ever built. Designed with the experience of the previous two post-Treaty classes, it superficially resembled the North Carolina-class albeit with a lengthened hull that made it the longest surface warship ever built (but not the heaviest). The main emphasis of the class was on speed and anti-aircraft protection. To this end, it retained similar armor protection to the South Dakota-class, and was equipped with nine 16-in Mark 7 guns as well, albeit with a higher caliber (it was originally designed with a dozen 16-in guns in four triple turrets but this was scaled down). This was the most powerful armament ever fitted on the US warship and performed exceptionally well even compared to the larger Japanese 18-in guns of the Yamato-class, with the added advantage of vastly superior US fire control radar. Anti-aircraft armament (dual-purpose) was also radar controlled, giving it excellent protection against aerial threats. Given the lack of surface engagements in the Pacific, the Iowas served primarily as carrier escorts and surface bombardment: none of the four ships ever engaged an enemy ship in action. The apparent obsolescence of battleships after the war resulted in their decommissioning, but were put back in service during the Korean War where they offered valuable fire support for the troops on land. Some of the ships were also brought back in action for Vietnam. In the 1980s and as part of the Reagan-era naval buildup, all four ships were given extensive refits which included the ability to fire Tomahawk and Harpoon missiles as a counter to the Soviet Kirov-class battlecruisers. Two of them were in action for the last time during the 1991 Gulf War, both for fire support duties and as missile platforms. They also used remotely-piloted vehicles as gunnery spotters for the first time. After the war, all four ships were permanently decommissioned and turned into museum ships; the only battleship class in which all units survive to this day.

The lead ship, the USS Iowa was commissioned in 1943 and saw extensive action in the Pacific against the Japanese, after which it served in Korea. It was the first to be refitted in the 1980s, although it had been decommissioned by the time the Gulf War started following an explosion of its number two turret in 1989. The USS New Jersey saw the most post-war action of any of the four ships, serving in Korea, Vietnam (the only one of the Iowas to do so), as well as the civil war in Lebanon in 1982, but was decommissioned just days before the Gulf War. The USS Missouri is perhaps most memorable for being the site of the Japanese surrender in Tokyo Bay on 3 September 1945 and was also deployed in Korea as well as the Gulf War. Lastly, the USS Wisconsin was in action in World War II, Korea and the Gulf War. Two other ships, the USS Illinois and USS Kentucky were laid down but eventually scrapped, the latter being considered briefly as a guided missile battleship (BBG-1). 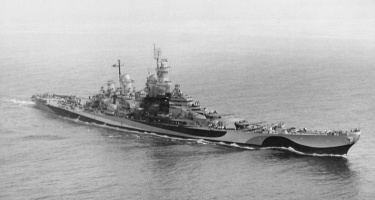