The Colorado-class was the last of the Standard-type battleships built for the US Navy before a post-Washington Naval Treaty lull. They were generally similar to the preceding Tennessee-class although the armament was uprated to mount eight 16-in Mark 1 guns, later replaced by Mark 5s, thus becoming the first US battleships to adopt this caliber of armament (largely as a response to the Japanese Nagato-class). Secondary armament originally consisted in 5-in Mark 15 guns which were located on the superstructure in order to be operational during rough weather but these were later replaced with Mark 12 dual-purpose guns after World War II began (the original 3-in anti-aircraft guns were also replaced by Bofors and Oerlikons). Armor protection was virtually identical to the Tennessee-class albeit with slight increase in belt armor and revamped underwater protection during the 1930s. And similar to the previous two classes, the turbo-electric propulsion also allowed more efficient subdivision. Noticeably, the Colorados were the last to be built with twin cage masts, which had been a characteristic of US battleships since World War I; however, the fore mast was much shorter since it extended from a higher superstructure. Two of the three ships of the class were in Pearl Harbor during the Japanese attack, of which the USS West Virginia suffered significant damage. The other two ships served entirely in the Pacific, participating in numerous engagements including the Battle of Leyte Gulf, and the invasions of Iwo Jima and Okinawa. All were decommissioned after the war and sold for scrap.

The USS Maryland was the first of the class to be commissioned, and was in Pearl Harbor during the attack, where she received modest damage, allowing it to be back in action relatively quickly. The USS Colorado was in refit in Bremerton, therefore being the only undamaged Pacific Fleet battleship at the start of the conflict. Both ships served in the Pacific with only modest refits. In contrast, the USS West Virgina was sunk in her berth but was eventually raised; however, the damage was enough to keep it out of action until 1944. It participated in Leyte Gulf, scoring a night hit against the Yamashiro in the Surigao Strait thanks to its Mark 8 fire control radar. A fourth ship, the USS Washington was cancelled when 75% complete as a result of the Washington Naval Treat and sunk as a target ship. 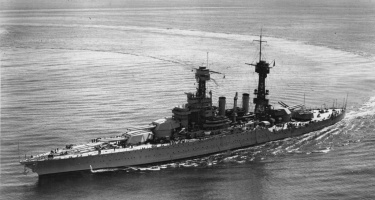