By far the most unique and revolutionary tanks built during the Cold War, the Stridsvagn 103 (also known as the Strv 103 or 'S-Tank') was a tank with no turret. The idea was the brainchild of Sven Berge of the Swedish Army Ordinance who was concerned about the greater vulnerability of tanks due to their height, but who also noted that tanks with lower profile (like Soviet ones) had extremely cramped conditions. The S-Tank had a crew of three which included a commander, driver/gunner, and a radio-operator facing the rear and who could also be tasked with driving the tank backwards. Aiming of the gun was done by varying the height of the hydropneumatic suspension and slewing the tracks, and the autoloader was capable of firing 10-15 rounds per minute. The gun used was a Swedish-built version of the popular British L7A1 but with a longer caliber, secondary armament included two hull-mounted machine guns and one fixed on the commander's cupola. Another unique feature of the S-Tank was the use of two different engines geared together; one being a multi-fuel engine and the other a gas turbine (the first in an MBT) which would be used only in emergencies. The S-Tank was fully amphibious, but did not carry NBC protection. Despite its radical design, the S-Tank was never used in combat nor exported. During comparative testing with other NATO designs, it received largely favorable observations although a major disadvantage was the inability to fire on the move, though this was not seen as problematic given the defensive nature of its use with the Swedish Army. It as retired from front-line service in 1997, being replaced by a slightly modified version of the German Leopard 2, the Strv 122.

Following initial pre-production versions, the first production variant was the Strv 103A which lacked a flotation screen; this was added along with a more powerful gas turbine in the Strv 103B. A further modernization took place in the 1980s and led to the Strv 103C with a new diesel engine and laser rangefinder. A planned Strv 103D with even more advanced features including reactive/appliqué armor was never put into production. 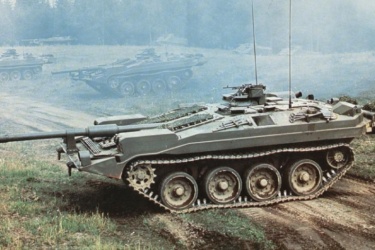