The Leopard 2 was the first Western third generation tank to enter service, in 1978, and has since consolidated as one of the finest tanks in the world thanks to its near-perfect mix of armament, protection and mobility, and its ability to be continuously upgraded throughout its more than three decades of life. The Leopard 2 was developed as a result of the failure of the MBT-70 program between the US and West Germany, after which the Germans went ahead with their own MBT design which was based on the then-new Rheinmetall 120-mm smoothbore which was later used for the M1 (among others) as well. Armor was of composite material and has been improved over the course of its service life to include layers of titanium and tungsten. A 1,500-hp diesel engine also gives it a greater speed than the much lighter Leopard 1 that it replaced. In the early 1990s, a major upgrade program resulted in the Leopard 2 (Improved), with a completely redesigned front turret with additional arrowhead-shaped add-on armor panels while the latest variant has a longer caliber gun. In contrast to its great NATO rivals, the M1 and the Challenger, the Leopard 2 has had little actual combat experience (it has seen occasional action in Afghanistan against the Taliban but it has yet to undertake tank versus tank engagements) but has proven itself equal or better than its counterparts in numerous NATO gunnery competitions. Furthermore, it has also achieved a much greater export success than any other third generation tank, being sold to as many as 16 countries including NATO allies Canada, Denmark, Greece, Norway, Poland, Portugal, Spain, and Turkey.

Initial prototypes of the Leopard 2 were completed between 1972 and 1974, some of which had an earlier Rheinmetall 105-mm gun. A pre-production variant known as the Leopard 2AV (Austere Version) subsequently competed with the XM1 prototype in 1976 for a US Army contract but lost out to the local design. There were only minor differences between the first three variants, the Leopard 2A1, A2 and A3, among which was the addition of a gunner's thermal sight. The Leopard 2A4 became the definitive variant of the original design, with titanium/tungsten armor for the turret, an all-digital fire control system and the ability to carry additional ammunition types. It was the most widely produced version of all, and most early models were eventually brought up to A4 standard. The subsequent Leopard 2A5, initially referred to as the Leopard 2 (Improved), featured a radical redesign of the turret, with spaced add-on armor giving extra protection against both kinetic and chemical rounds, as well as all-electric controls. The least version in service is the Leopard 2A6 which adds a longer caliber (L55) version of the Rheinmetall 120-mm gun as well as improved mine protection. Export versions may feature numerous differences or enhancements from their German counterparts, but otherwise tend to be based on the A4-A6 variants. Swedish versions are known as Strv 122 while Swiss versions are designated Pz 87. Non-combat versions include the Büffel armored recovery vehicle, Legun bridge layer, and the Kodiak combat engineering vehicle for the Swiss Army. 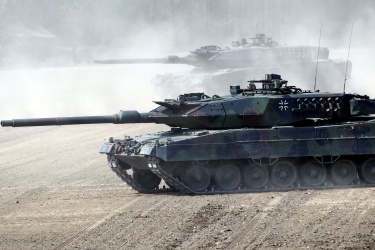