The SK 105 Kürassier, also known as the Jagdpanzer K (JaPz K) in Austrian service, is a light tank (occasionally classified as a tank destroyer) based on a redesigned hull of earlier Saurer tracked APC and mounting a similar gun as that of the French AMX-13. Like the 4K 4FA, the hull is of all-welded construction with the driver seated in the front left position. In the center of the vehicle is an oscillating turret that is a locally-built version of the French FL-12 turret of the AMX-13, with space for both the commander and gunner (the gun is equipped with an autoloader). The turret mounts a 105-mm gun with an additional 7.62-mm machine gun as secondary armament in addition to smoke dischargers. Typical ammunition include both HEAT as well as APFSDS rounds. There is no amphibious or NBC capability, but nevertheless the SK-105 is designed for operations in cold, mountainous climates with the option of spiked tracks. Later vehicles were fitted with digital fire control computers and laser rangefinder. Protection is similar to that of the 4K 4FA but add-on armor modules are available optionally. Like the AMX-13, the SK 105 proved successful in the export market, being adopted by numerous African and Latin American countries, with the largest orders coming from Argentina and Morocco. Although no longer in Austrian service, it is still used by most of its other clients.

The first prototype of the 4K H6FA was produced in 1967 and a second prototype two years later; the name was later changed to SK 105. A modernized variant is known as the SK 105/A1 with an electronic fire control computer and improved power train. The SK 105/A2 added a fully stabilized turret and a digital fire control computer. Other variants included the SB 20 Greif armored recovery vehicle and an associated pionier/engineer vehicle. A driver trainer vehicle also exists. 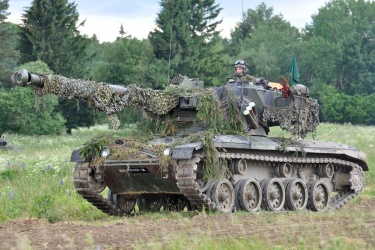