The L-33 Ro'em was one of the many post-war adaptations of the M4 Sherman tank, in this case a 155-mm self-propelled howitzer. The chassis used is that of the M4A3E8 variant of the Sherman which is notable for having a horizontal volute spring suspension as well as a Cummins VT 8-460-Bi diesel engine. The Ro'em's hull is a large superstructure that appears overlaid to the the M4 hull. The driver is seated at the front left with the commander seated behind and above the driver. The rest of the, rather extensive, crew of eight enters the fighting compartment through a single hatch on each side of the vehicle. Main armament consists of a Soltam M-68 33-caliber howitzer which has a maximum range of 21 km and a rate of fire of six rounds per minute in burst mode, achieved thanks to a pneumatic lifting/loading mechanism. A .30-in M1919A4 machine gun is also fitted for defensive armament. The Ro'em entered service sometime before the 1973 Yom Kippur War where it is believed some were used in combat. It was also used during the 1982 Lebanon Civil War. It was eventually phased out with the introduction of the US-supplied M109.

The L-33 Ro'em was developed in the early 1970s, based on the M-68 33-caliber howitzer. A longer 39-caliber weapon known as the M-71 was also produced but it is not believed to have been used in a self-propelled mount. 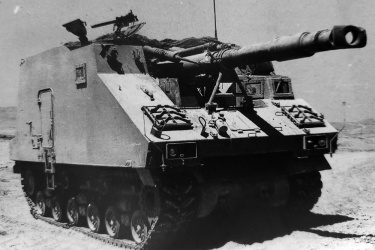